Sometimes when you pass over the bridge between Denmark and Sweden, I think about how small the distance is between these two countries and yet they are so far away from each other.

Due to that I am part Danish and part Swedish on my mothers and fathers side and born within the British Commonwealth, I can understand both sides of how they communicate or don´t communicate with each other.

I am not surprised over some of the difficulties that arise between Sweden and Denmark when it comes to both culture and business.

If you have followed the discussions regarding Greater Copenhagen or the merging of Post Nord in Sweden and Denmark, then you know what I am talking about. 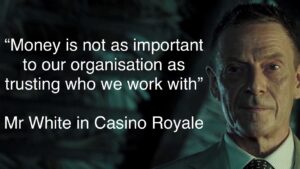 The difference is not only in the language but also in our culture and the way we think, so I am not surprised at all that there sometimes are difficulties in doing business or finding any type of agreement that both sides acknowledge and are prepared to follow.

Every time there is an agreement between a Swede and a Dane, the Swede sees it as an agreement that you are supposed to follow to the letter, but the Dane see it as the beginning of an relationship where you have to find the boundaries within the agreement.

When I talk to both sides it´s obvious that both sides struggle to understand each other and why things go wrong once an agreement is settled and signed.

Over the years I have worked with quite a lot of different cultures and countries, and I must say that you have to understand each country, both by its history and its ways of doing business.

No one is better or worse than the other, its more about being aware of what you need to handle on both sides of the bridge and what to avoid when it comes to making an agreement.

When I run multicultural trainings in Scandinavia with global companies, we sometimes blend both language and cultures into the English language, but still you can see the trademarks of each culture even though they all speak English on a professional level.

Another thing to keep in mind is how decisions are made in different cultures and countries, also how the chain of commands is played out in a company, all of them have different ways, you do not need to agree to how it is done, but you still have to handle it.

Over the years I come to enjoy the difference and nowadays it’s a pleasure to be able to help out in matters that others sometimes see as a problem, where I see differences that has to be handled with respect and delicacy.

We should all cherish our differences rather than trying to make everyone fit into the same mold. If you see that as a problem, then I suggest you stay on your own side of the bridge while everyone else goes on with whatever business they are conducting.

Globalization is here to stay, and the world is becoming smaller and smaller by the day, soon we all will be part of different businesses around the world, some of them we don’t like others we love, still you have to interact with them.

If you are looking for an outside view to any kind of issues or topics regarding different cultures in business, then feel free to contact me, and we can take it from there.

Previous Story2020, a stab in the dark?
Next StoryRules of engagement